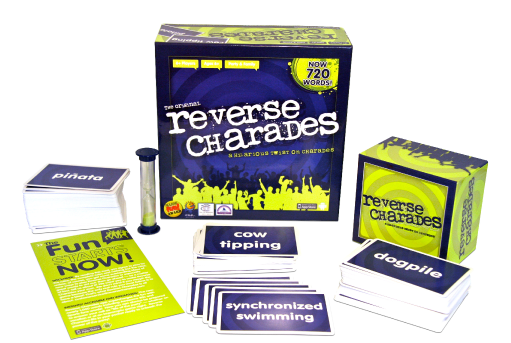 See our contest entry page on our website to enter the contest usng Rafflecopter.

Our first question was why it was called Reverse Charades.  We had all played charades before and were familiar with the concept … one person acts out a word or phrase while their team guesses what they are acting out.   The “Reverse” part of this game is that one team member tries to guess the words that their team acts out.   Having more people acting out the words makes it both easier and more fun.

We separated into 2 teams and with a quick review of the rules were up and playing within minutes.   The words are already printed on the cards which come with the game. The selection is very good, with the words varying from easier ones like ‘pogo stick’ to more difficult ones such as ‘Michael Jackson’. There is a timer and teams try to guess as many words as they can during their time.

This game had us laughing with every turn!   It is fun to see how players have different ways to interpret the words.   We quickly learned that we could act out the words by playing off of each other’s ideas.   We have a large family (our four kids are ages 12, 15, 17 and 21) and everyone enjoyed the game!  Honestly that almost never happens!!   One of our sons has dyslexia and he had no problem acting out the words and had the best time trying to guess what his teammates were acting out.

I highly recommend Reverse Charades for family game night, birthday parties, holiday parties, sleepovers or family get togethers.   We always play games Christmas Eve and this is at the top of everyone’s list to play this year.   It is also on my shopping list to give to family and friends and will make a great game for birthday parties throughout the year!

Reverse Charades is available in over 1,800 select stores in the U.S., Canada and abroad (including Barnes & Noble, Hallmark, Learning Express and Books-a-Million) and on Amazon.com

For more info on our NEW Girls’ Night In, Sports and Holiday expansion editions as well as our Junior and French editions, Apps for Apple and Droid products: www.reversecharades.com/about-us

My Tweets
Back to Top